A possible future Lions tourist has been nominated for the International Rugby Board Junior Player of the Year 2011 Award. [more] 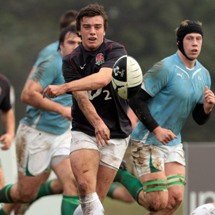 A possible future Lions tourist has been nominated for the International Rugby Board Junior Player of the Year 2011 Award.

England fly-half George Ford is among three players shortlisted for the accolade following the conclusion of the World Junior Championships.

The Leicester Tigers playmaker is already being tipped as a senior England international in the making and could well be in contention for a Lions spot in 2017 if he continues to progress at his current rate.

He was a central figure in England’s charge to the final of the Under 20 tournament in Italy having guided England to Grand Slam success earlier in the season despite still being just 17 years old at the start of the Six Nations.

Ford has been chosen alongside New Zealand duo Sam Cane and Luke Whitelock for an award that has previously been won by the likes of Lions and Wales centre Gavin Henson, France fly-half Lionel Beauxis, and All Black trio Luke McAlister, Isaia Toeava and Jerome Kaino.

"It's a massive honour to be nominated, especially when you consider that the likes of Luke McAllister and Isaia Toeava are among previous winners," Ford told Leicester’s official club website.

"It was a massive team effort over there in the World Junior Championships and, while we were gutted not to win the whole thing, we performed well and can take a lot from the competition.

"I can't take too much credit for the nomination, though, we had a squad of 26 players who all played their part."

If Ford is chosen above his Kiwi rivals for junior rugby’s top individual honour he would become the first Englishman to win the award since it’s inception in 2001.

The son of England defence coach Mike Ford, George was part of the academy set ups at rugby league outfits Wigan Warriors and Bradford Bulls, as well as union side Leeds Carnegie, before he moved to Welford Road at the age of 15.

He became the youngest-ever player in the English professional game when he made his debut for the Tigers in their LV= Cup clash with Leeds in November 2009. Ford was just 16 at the time.

With Toby Flood almost certainly away at the World Cup in the autumn, Ford could play a bigger role in his club’s Aviva Premiership campaign this term, although he faces a long wait to find out if he is named the world’s best young player as the announcement won’t take place until October 24 in Auckland, New Zealand.