Robbie Deans looks set to lead the Wallabies into action against the Lions in two years' time. [more] 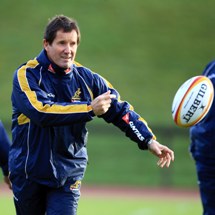 Robbie Deans looks set to lead the Wallabies into action against the Lions in two years’ time.

Australia’s head coach has reportedly agreed to re-sign with the Australian Rugby Union for another two years.

Such a move would see Deans remain in charge of the Wallabies until the end of 2013, with the Lions arriving Down Under that same summer.

There had been heavy speculation that Deans could leave his post after this autumn’s World Cup but the ARU have always looked favourably on offering the New Zealander an extension to his current contract.

And ARU boss John O’Neill has now said publicly that an extension is on the cards and is likely to be signed by both parties after the Tri Nations opener against the Springboks a week on Saturday.

"It's all on track. It's been a pretty trouble-free negotiation and it's an extension through to the end of 2013," said O’Neill.

“We haven't got a signed contract yet but we will get these two Test matches (against Samoa and South Africa) out of the way – they're back to back so he's busy and I'm busy.

"He and I have agreed in principle, the formality now is with the lawyers and he's just getting on with the job.

"There's no insurmountable issues and in a quieter moment we'll formally announce it."

Under Deans’ stewardship, the Wallabies have become arguably the most exciting attacking team in world rugby and have high expectations heading into the World Cup.

Having beaten the Springboks on South African soil last season and ended a 10-game losing streak against the All Blacks in Hong Kong in November, things are looking good for Australian rugby.

Throw in last week’s Super 15 triumph by the Queensland Reds and it becomes clear why O’Neill believes the next few years could see sustained success for a national side packed with young talent like Kurtly Beale, James O’Connor, Quade Cooper and Will Genia.

"I'm very excited, I think we are turning momentum into reality," added O’Neill.

"The Super Rugby trophy is a big trophy and we've only won it twice before with the Brumbies. Once you get the taste of success you want more so I think the Reds victory will add further impetus to that momentum.

"There's no easy games, I mean Samoa won't be easy and, while there's been a lot of publicity about the Springboks, when I read their team on paper it's not shabby, and then we've got the All Blacks home and away.

"We targeted 2011 to be a turning point for Australian rugby and so far so good."