Australia did what the last pride of Lions were unable to do as they beat South Africa in Durban on Saturday evening. [more] 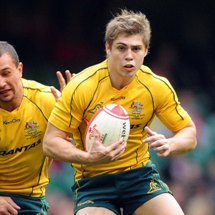 Australia did what the last pride of Lions were unable to do as they beat South Africa in Durban on Saturday evening.

The Wallabies won 14-9 at the same venue where the Lions were beaten 26-20 two years ago as they kept their Tri Nations hopes alive.

Robbie Deans’ men bounced back from last weekend’s disappointing defeat to New Zealand to secure a second win of the shortened tournament.

James O’Connor kicked three penalties and Pat McCabe scored a second half try as the Lions’ next opponents overturned a narrow half-time deficit.

The Springboks recalled a whole host of big-name stars as they looked to avoid a third straight Tri Nations failure but even the most-experienced line up in their history couldn’t prevent a demoralising defeat with their opening World Cup clash with Wales now less than a month away.

Poor weather conditions, particularly in the latter stages, led to a particularly tight affair, unlike the last fixture between the two sides in South Africa when the Wallabies triumphed 41-39 in Bloemfontein.

But instead of favouring the traditionally conservative Boks, it was the visitors who dealt with the rain the better of the two sides. Australia fly-half Quade Cooper answered those critics who believe he is a far poorer player in the wet than the dry as his controlled kicking game kept the Wallabies on the front foot.

And with O’Connor having kicked the away side into a five point lead in the final quarter, the Boks never looked like claiming the try they needed to level the scores.

Australia will now enjoy a week off ahead of the final Tri Nations fixture of the year against New Zealand on August 27, while South Africa host the All Blacks in Port Elizabeth next Saturday.

As things stand, with Australia having played a game more than the All Blacks but with a home tie against the Kiwis still to come, the top two sides in the world are level on nine points with the Boks boasting just a single losing bonus point from their three matches.