Roberts ready to win at all costs

2009 Lion Man of the Series Jamie Roberts insists Wales are ready to win at all costs during the World Cup. [more] 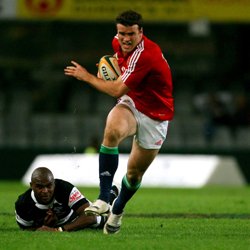 2009 Lion Man of the Series Jamie Roberts insists Wales are ready to win at all costs during the World Cup.

Warren Gatland's men on a collision course with defending champions, and the Lions' last opponents, South Africa, who they face in Wellington on Sunday.

Roberts has plenty of experience against the Springboks, with both Wales and the Lions, but has never triumphed – a wrist injury ruled Roberts out of the Third Test victory two year's ago.

In 25 previous meetings Wales have claimed just one Springbok scalp. But Warren Gatland's men have come tantalisingly close on the past three occasions and Roberts is determined to kick-off Wales' World Cup campaign in the best possible fashion.

"Every team will be desperate at the World Cup. It's win at all costs. It doesn't matter if you win ugly or well, a win's a win," said 24-year-old Roberts.

"I've never beaten South Africa but have come close many times. A win would be a great start for us and would be a hell of an experience. It's got all the ingredients to be a World Cup classic."

Wales enter the showpiece gathering on a tide of confidence following an encouraging warm-up program which included wins over England and Argentina. But steel-eyed Roberts insists the World Cup is all that matters.

"We've been very pleased with the warm-up games and we performed admirably in parts. But that counts for nothing. All the hard work starts now.

"The preparation work is done and we are building for the first game. It's important we make huge strides forward because the World Cup is where it will count. A win would be a great start for us."

After coming up against the men in Green and Gold six times since making his debut in 2008 Roberts knows what to expect against the Springboks in the World Cup opener.

South Africa may have slumped to a bottom-placed finish in the Tri-Nations but sent the rugby world a warning with a 18-5 victory over New Zealand two weeks ago.

"The way South Africa have played over the last three or four years has not changed much," added Roberts.

"They're hugely physical and like to dominate the contact area and collisions. Their kick chase is probably the best in world rugby. If they don't go forward then the ball goes to Steyn who kicks. It's a simple game-plan.

"They're not a team who scores four or five tries. They win games like against New Zealand with five penalties.

"Steyn is an extremely dangerous kicker as we found out with the Lions. You can't afford to give that guy a penalty anywhere in your own half.

"We know that is coming."