England needed a late Ben Youngs score to see off Argentina in Dunedin on Saturday. [more] 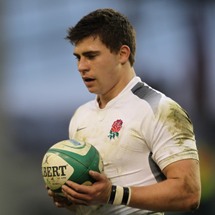 England needed a late Ben Youngs score to see off Argentina in Dunedin on Saturday.

The replacement scrum-half crossed for the game’s only try with 13 minutes remaining as England under performed in their opening World Cup fixture.

England trailed for the vast majority of the match until Jonny Wilkinson converted Youngs’ close-range effort to hand his side a 10-9 advantage.

Wilkinson added a second penalty to seal a 13-9 win but the double Lions tourist uncharacteristically missed five kicks at goal having been preferred to Toby Flood at outside-half.

Pumas full back Martin Rodriguez was equally profligate with the boot after taking over the full-time kicking duties from Felipe Contepomi after the former Leinster star left the field injured mid-way through the first period.

The Argentines missed a total of six attempts between them as they narrowly missed out on a famous triumph that very few pundits had predicted heading into the tournament.

Argentina were the success story of the 2007 World Cup in France where they shocked Ireland, Scotland and the host nation to finish third but their preparations this time around had been less than ideal.

A lack of game time had hampered their prospects, while a comprehensive defeat to Wales in a World Cup warm-up fixture suggested England should see off their South American opponents with something to spare.

But it was the Pumas who proved the more forceful side at Otago’s brand new stadium as England struggled to find any fluency in attack. The underdogs won the battle of the breakdown and an England victory looked unlikely until Youngs intervened.

The Leicester scrum-half hadn’t featured for his country since the Six Nations after having minor knee surgery but he made a massive impact when he replaced Richard Wrigglesworth 10 minutes into the second half.

Youngs immediately added a threat around the base and it was from there that he sneaked over after isolating an Agentine front-row forward at a close-range ruck.

The win sees England move into second place in Pool B, a point behind Scotland who picked up maximum points in their scrappy victory over Romania earlier in the day.