Jerry Flannery has been dealt yet another injury blow with the news that his World Cup has come to a premature end. [more] 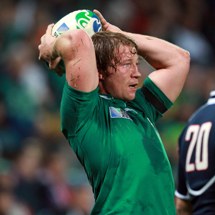 Jerry Flannery has been dealt yet another injury blow with the news that his World Cup has come to a premature end.

The Munster hooker has torn a calf muscle and will play no further part in the tournament.

Flannery, who came on as a second-half replacement in Ireland’s World Cup opener against the USA, has endured a torrid time over the past two seasons.

Having been selected for his first Lions tour in April 2009, Flannery damaged his elbow during preparations at Pennyhill Park and didn’t even make the plane to South Africa.

The 32-year-old then required career-saving surgery on his calf last season after missing large chunks of the campaign and breaking down during a comeback game for Munster in January.

Flannery missed the summer and autumn Tests in 2010 and this year’s RBS 6 Nations and only returned to the Irish line up for the first World Cup warm-up fixture against Scotland at the beginning of August.

He suffered the latest setback in training ahead of Ireland’s crucial Pool C clash with Australia this Saturday, with Ireland manager Paul McNaughton confirming that a scan has shown a tear that will require a recovery period of up to a month-and-a-half.

"Obviously, it is particularly disappointing for Jerry to have suffered this injury at this point in the tournament," Ireland team manager Paul McNaughton said.

"With the fact that he is out for four to six weeks, we needed to make the decision to fly Damien Varley down as soon as possible.

"Sean Cronin will step into the replacements seamlessly this weekend which shows the importance of having experience and depth in the squad."

Varley, who shares the hooking duties at Munster with Flannery, is expected to arrive in New Zealand on Saturday and will come into contention for the third and fourth round matches against Russia and Italy respectively.