Lions full back Rob Kearney says he and his Ireland team-mates are 'winners' whose World Cup chances shouldn't be dismissed despite a poor run of results. [more] 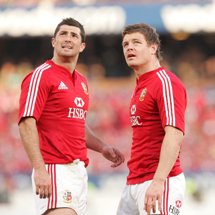 Lions full back Rob Kearney says he and his Ireland team-mates are ‘winners’ whose World Cup chances shouldn’t be dismissed despite a poor run of results.

The Irish squad have been written off in recent weeks after four straight defeats in their warm-up matches and an unconvincing opening win over the United States.

But Kearney, who will be making his first ever World Cup appearance when Ireland take on Australia on Saturday, insists the squad haven’t lost their winning mentality.

Just two seasons ago, Ireland were celebrating a first Six Nations Grand Slam since 1948, while Leinster and Munster, who provide the majority of players in the national line up, have dominated the European club scene in recent years, winning the Heineken Cup on four of the last six occasions.

And with Saturday’s encounter with the recently-crowned Tri Nations Champions likely to decide who tops Pool C, Kearney claims Ireland are close to reproducing their best form.

"There's lot of nerves out there, I know that, but we haven’t become a bad team," Kearney, who wasn’t selected for Ireland’s 2007 World Cup campaign, told the Irish Independent.

"We have a lot of players who have won a lot of competitions. We are winners, we know how to win.

"It is close, things are happening for us in training and that's important. If we were training brutally and playing brutally, well, then you would have to reassess. But when you are training well and it's not being replicated in matches, you know you are close.

"Should we have put 30 points on a lower-ranked team like the US? Probably, but the World Cup has shown the standards of these teams are getting better, conditions were brutal and we got off to a slow start.

"We all have confidence in our own ability and in what we can do and achieve and, hopefully, it happens this weekend."

The Irish backline haven’t been firing as well as head coach Declan Kidney would like in 2011 but that may have something to do with the fact that Lions Test star Kearney missed eight months of action with a knee injury, before suffering a groin niggle during the summer friendlies.

Now fully fit and raring to go, Kearney is among five Lions in an dynamic looking back division that also includes Brian O’Driscoll, Gordon D’Arcy, Keith Earls and Tommy Bowe.

With such talent out wide, Ireland surely cannot continue to falter. And while the Wallaby backs may be the most potent attacking threat in world rugby at the moment, Kearney believes the fast, open game Australia favour may play into his, and into Irish hands in Auckland.

"We haven't been doing ourselves justice, things aren't where they should be and where we expect them to be, but we are close. We trained really well so it's frustrating when you go out into games and you're not replicating your training. It's tough, it's very tough.

"We are holding back a few little bits and pieces but you don't drop balls just because you want to hold back. It's a little bit of pressure, a little bit of nerves and knowing that if you are not fulfilling your own potential, it plays on your mind a little bit more.

"But the thing about this situation and sport in general, I feel, is that when you have gone through bad patches, as I have myself, it just takes one thing to work for you, one set-piece to go really crisp and sharp handling, and everything is forgotten – you're back on your game and ready to go again. I am just hoping that one little spark comes in the first 10 minutes this weekend.

"And, if I had a message for the fans, it's that I do genuinely think we're close to clicking and getting back on the right track."