Ronan O'Gara's international future remains up in the air after his latest comments about his possible retirement. [more] 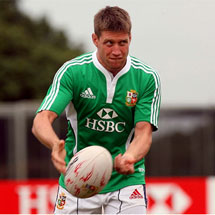 Ronan O’Gara’s international future remains up in the air after his latest comments about his possible retirement.

The veteran fly-half looked to have made it clear where his intentions lie after telling a television station, ‘I’m done with Ireland in a few weeks’ following the incredible win over Australia last Saturday.

O’Gara attempted to diffuse those rumours earlier today but his latest comments have now made it unclear whether he will carry on past his third global gathering.

"I said I'd be done with Ireland in a few weeks and there's different interpretations to that," said O’Gara.

"It's important for me to put an end to that (speculation) because it's a distraction the team doesn't need. In my own head, I'll reassess at the end of the World Cup.

O’Gara, who has 113 Ireland caps to his name and more than 1,000 points in Test rugby, insisted he has no intentions on giving up his international shirt before he’s ready but his comments would still suggest that decision will arrive sooner rather than later.

Ireland take on Russia and Italy in their two remaining pool games, with successive victories set to ensure a quarter-final spot, most probably against Wales.

A possible semi-final against England, Scotland, France or even Argentina would then follow, with another win giving O’Gara the chance to bow out on the greatest stage of all on October 23.

"From my point of view, when you set goals as a professional rugby player, I think everything ends hopefully at the World Cup Final and that's exactly where I stand at the minute," added O’Gara.

"It's about being part of an Ireland team that hopefully will do itself justice in this competition.

"Playing for my country means so much to me. You don't walk away from that until it's right and you take advice from people you respect. I'm not at that stage."