Wales fly-half Rhys Priestland has been ruled out of Saturday's World Cup semi-final with France. [more] 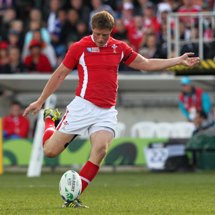 Wales fly-half Rhys Priestland has been ruled out of Saturday’s World Cup semi-final with France.

The Scarlets playmaker picked up a shoulder injury in the win over Ireland and hasn’t trained at all this week.

Priestland, who has featured in all five of his country’s World Cup games to date, only made his international debut in August but has since become a key member of Warren Gatland’s starting XV.

His absence will be a blow to Wales’ hopes of making a first World Cup Final but Gatland is at least able to call up two Lions stars to his starting side and matchday 22.

Perpignan-bound James Hook will start in the No10 shirt at Eden Park, while triple Lions tourist Stephen Jones takes Hook’s spot among the replacements.

ales have made one change to the starting line-up which triumphed over Ireland last weekend for the 2011 Rugby World Cup semi-final clash with France at Eden Park on Saturday (Kick-off 9pm).

Priestland injured his shoulder during Wales’ impressive 22-10 quarter-final victory over the Irish in Wellington last Saturday.  He was not considered for selection this week and will now continue his rehabilitation over the next few days with a view to returning next week.

On the bench 102-times capped Scarlets fly-half Stephen Jones comes in for the promoted Hook, who himself brings 57 caps worth of experience to side.

“Time was against Rhys, but we are happy that we have the talent and ability elsewhere in the squad to cover him,” said Gatland.

“Rhys has done everything we have asked of him and more during this World Cup, but, when we have players of the calibre and experience of James Hook and Stephen Jones coming into the squad and starting line-up, there is no sense that Rhys’s absence leaves us any weaker.”

Priestland’s enforced absence is the only change to the Welsh line up for their first semi-final since 1987, with second row Luke Charteris having recovered from a shoulder injury that forced him off at half-time against the Irish.

And while simply reaching the final four has been viewed as a huge success in Wales, Gatland insists his side won’t be happy to head home as beaten semi-finalists.

“We know that the people in Wales and the fans that have travelled here are excited about reaching the semi-finals of the World Cup and we are too, but beating France on Saturday must be and will be our sole focus,” added Gatland.

“The time to reflect and to celebrate will come if we win our next two matches. Until that happens our focus on the task ahead must be absolute.”

Meanwhile, France are unchanged from the team that beat England 19-12 last Saturday, with Morgan Parra continuing at outside-half and Dimitri Yachvili confident he will overcome a thigh injury to start at No9.