Wallaby fly-half Quade Cooper hopes to be back in action next April. [more] 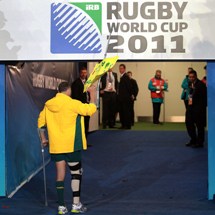 Wallaby fly-half Quade Cooper hopes to be back in action next April.

Widely expected to be one of the stars of the 2013 Lions tour to Australia, Cooper tore his anterior cruciate ligament in the Wallabies’ third-place play-off win over Wales at the recent World Cup.

The 23-year-old playmaker had reconstructive surgery on Thursday and his club side the Queensland Reds are targeting an impressive five-and-a-half month recovery period.

"Quade's operation went smoothly with surgery results confirming the circumstances of his injury are typical to what you normally expect from a torn ACL," said Reds boss Ewen McKenzie.

"We're confident he'll return in the quickest time possible and hopefully in time for the Brumbies game in early April.

"There's no doubting Quade's professional approach to the game and he will work tirelessly with our medical staff to ensure he is back on the field sooner rather than later. That's just the type of person he is."

Cooper’s absence for at least the first two months of the Super Rugby season hands the Reds a selection problem as they look to retain the southern hemisphere crown they won by beating the Crusaders back in June.

McKenzie, who is being heavily linked with the Wallabies job despite Robbie Deans being contracted until after the Lions tour, doesn’t appear to have a standout replacement, although Mike Harris, Jono Lance, Ben Lucas, Ben Tapuai, Dallan Murphy or Ulupano Seuteni could be handed a shot at taking over at out-side-half.

"It's disappointing to lose Quade but we have a number of capable players who can step in and excel in his absence," added McKenzie.

"Recruitment and retention has been priority No.1 since I joined the Reds and we've developed a roster that can not only survive the loss of Quade, but thrive in his absence.

"We used 37 players on our way to winning the Super Rugby competition last year and that collective effort is again going to be the focus of our success. The whole group needs to step up."