Shaun Edwards has sparked a battle for his services after leaving London Wasps. [more] 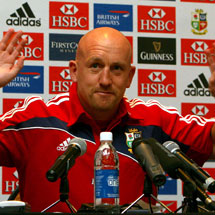 Shaun Edwards has sparked a battle for his services after leaving London Wasps.

Edwards, who was part of Sir Ian McGeechan’s coaching staff on the 2009 Lions tour of , has parted company with the Adam’s Park outfit despite still having two years left to run on his contract.

The rugby league legend had been with Wasps for more than a decade but had hinted that he would be looking for a fresh challenge prior to the recent World Cup.

"I'll make a statement when it all comes out properly but the club is in financial difficulties and maybe it is time for me to go on to other challenges," was Edwards’ take before guiding Wales to the semi-finals in his role as defence coach.

Wasps have been reportedly looking to cut their wage bill after owner Steve Hayes put the club up for sale last month so Edwards’ departure doesn’t come as a real surprise even though he has helped guide them to four Premiership titles and two Heineken Cup crowns since switching codes in 2001.

His role with is also subject to speculation, with his contract having run out at the end of the World Cup. head coach Warren Gatland has resigned with the WRU until 2015 but Edwards and fellow assistants Rob Howley, Robyn McBride and Neil Jenkins are yet to be tied down by the .

Edwards has been heavily linked with a position within the set up, as well as with the head coach role at Cardiff Blues.