Lions legend Brian O'Driscoll is facing rumours that his stellar career may be over after he was ruled out for the rest of the season. [more] 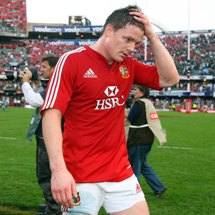 Lions legend Brian O’Driscoll is facing rumours that his stellar career may be over after he was ruled out for the rest of the season.

The skipper will almost certainly be sidelined for the remainder of the current campaign after it was announced that we will have surgery next week.

O’Driscoll will go under the knife to relieve a trapped nerve after struggling with a neck/shoulder injury for almost a year.

The 32-year-old played a full part for his country at the recent World Cup but hasn’t featured for Leinster since his return from .

O’Driscoll told reporters today that he won’t be back in action until the start of May at the earliest, meaning he would miss all bar the final round of the RaboDirect PRO12 and the final of the Heineken Cup should Leinster go all the way in attempting to retain their European crown.

The 2005 Lions captain will sit out ’s RBS 6 Nations campaign but could be involved in the summer Tests in the southern hemisphere.

And with the next Lions adventure still 18 months away, O’Driscoll at least has the perfect motivation to regain his fitness in time for a fourth tour and one last crack at a series victory with Britain and Ireland’s elite.