Wallaby wing Digby Ioane remains undecided as to whether he will be around to face the Lions in two years' time. [more] 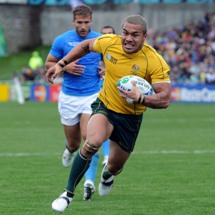 Wallaby wing Digby Ioane remains undecided as to whether he will be around to face the Lions in two years’ time.

The Reds flyer has been heavily linked with a lucrative move to Japan, a switch that could seriously impact on his chances of taking on Britain and Ireland’s elite.

Ioane has been named in the Australia squad for the two-match tour of the UK later this month and the 26-year-old has insisted no decision will be made on his future until he returns home in December.

"It's up in the air at the moment,” said Ioane, who is expected to be a first-choice for the Wallabies if he is still Down Under when the Lions come calling.

"It's not all sorted yet and I'm going to leave it until I play these last two games in the UK and then I'll put pen to paper when I come back."

Ioane is thought to have been offered a seven-figure deal from Japanese outfit Kubota which apparently dwarfs the financial terms on the table from the Australian Rugby Union and the Queensland Reds.

But Reds coach Ewen McKenzie has already stated that he is confident Ioane will stick with the Super Rugby champions for a fifth successive season.

The 26-year-old turned down a similar Japanese offer in 2009 after the intervention of Wallabies boss Robbie Deans and McKenzie expects the same outcome this time around.

“I'm not stressing about it,” said McKenzie.

“It's been trickling along for some time but I've been quietly confident the whole time so it's not something I'm worried about. I'm sure he and his management team will sort it out eventually.

“The longer there's no news the better it is because in the end it lines up better with our season rather than theirs.”

News
Previous story Surgery setback for Jones
Next story Head back to 2001 with lionstour.com