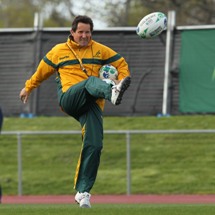 Australia duo Robbie Deans and James Horwill are expecting Danny Cipriani to make a big impression at Twickenham this weekend.

Cipriani will line up for the Barbarians against the Wallabies on Saturday as he returns to English Rugby’s headquarters for the first time in nearly three years.

The 24-year-old started England’s disastrous 42-6 defeat to South Africa in November 2008 and hasn’t featured for his country since.

Having fallen out of favour with former England team manager Martin Johnson, Cipriani headed to Australia in the summer of 2010 to join Super Rugby’s newest franchise the Melbourne Rebels and both Deans and Horwill have been impressed with what they’ve seen Down Under.

Cipriani’s free-flowing approach should suit the Babaas’ expansive style of play, with Deans wary of a repeat of the performance the ex-Wasp produced the last time he faced the Wallabies three seasons ago.

"Danny Cipriani will enjoy the nature of the game," said Wallaby boss Deans.

"He is a very good player and will be given a license to do that.

"We suffered in 2008 against him (in Australia's 28-14 win). He broke the line a couple of times with some really good touches."

Horwill saw Cipriani first-hand during the last Super 15 season and, although the Rebels and his own championship-winning Reds outfit finished at opposite ends of the table, the Wallaby skipper is expecting the unexpected on Saturday.

"It’s hard to pick what he will and won't do,” added Horwill, who insisted the Wallabies will match the Babaas in employing an attacking game plan.

"During the Super Rugby season he really took teams apart.

"We also want to play an attractive style of game. We will go out there and see what we can do but we want to get a result.

"I think it will be a fairly entertaining spectacle from a fans' point of view."

As for Cipriani himself, the much-talked about playmaker admits Saturday is a massive chance for him to remind the English public and the national set up exactly what they’ve been missing.

He insists he has worked hard on his much-publicised defensive weaknesses and has openly admitted he dreams of being selected for Lions in 2013. And with Johnson now having left his post, that dream could soon be a lot closer to reality.

"I'd love to get the opportunity with England again," Cipriani told BBC Sport.

"Instead of trying to dismiss those points it was to take them on board and that's what I've been doing with the Rebels.

"I now get to play at Twickenham again in front of a big crowd for the Barbarians, which is such an honour, especially when you look at the squad we've selected.

"To play with the likes of Bryan Habana and Richard Kahui, and have Graham Henry coach you as well is a great thing. We're playing against high quality opposition, too, so I'm looking forward to it."