More of the same

Andy Irvine says the 2013 Lions will look to the example set by the class of 2009 when they head to Australia the summer after next. [more] 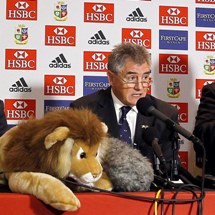 Andy Irvine says the 2013 Lions will look to the example set by the class of 2009 when they head to Australia the summer after next.

The 2009 tourists came agonizingly close to beating the World Champion Springboks in South Africa on an adventure that restored a huge amount of pride following a disappointing trip to New Zealand in 2005.

And Lions team manager Irvine believes the model put in place two years ago will stand the squad in good stead for another successful tour on and off the field.

“Most people who were out in South Africa in ‘09 would agree it was a hugely successful tour off the field and as near as dammit on the field.

“We played some great rugby, were very unlucky with injuries in the second Test and we outscored the Boks seven tries to five so on the field of play there was a huge amount of success there as well.

“We were very pleased the way the team gelled and was coached in 2009. It's a great credit to all of those involved.”

The one disappointing element of the 2009 tour – apart from the end result – was the crowd numbers at the early fixtures.

Attendances against the likes of the Royal XV were lower than the Lions would have liked, but Irvine doesn’t envisage similar frustrations Down Under.

“The South Africans did miss a trick in ’09 as far as tickets were concerned,” added Irvine.

“That was hugely disappointing. I went on three Lions tours and almost every match was sold out. From the players' point of view it's not nearly the same if the atmosphere is dead.

“I am very confident the Australians will get it right, though. They know how to market the game. You just have to look at the France versus USA match at the 2003 World Cup which was a sell out.

“There will be a huge support out there. Australia is an incredibly popular country to tour, plus there’s a massive expat community.

“I am confident we will have pretty full stadiums. You only have to listen to (Australia coach) Robbie Deans: they only get a crack against the Lions every 12 years and there are very few who play the Lions twice.”