Charteris out of 6N 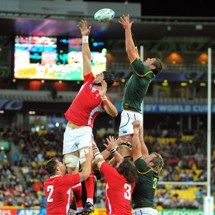 Wales lock Luke Charteris will miss the RBS 6 Nations with a wrist injury.

The giant Newport-Gwent Dragons skipper has had surgery to cure a problem he picked up at the World Cup and will now be sidelined until early April.

The news is a major blow to national coach Warren Gatland and co after Charteris established himself as one of the globe’s leading second rows with a series of outstanding performances in New Zealand.

"I had an operation on Friday and, according to the surgeon, it went OK. They said I was looking at four months out," said Charteris.

The 28-year-old has become an integral part of a Wales side that won plenty of plaudits at the recent global gathering, moving ahead of Bradley Davies of the Blues in the pecking order and arguably toppling Alun Wyn Jones from the position of first-choice lock.

Charteris has even been tipped as a future Lion by current Australia captain James Horwill – a player the 6’9’’, 20st forward could well go head-to-head with if he does earn selection for Britain and Ireland’s elite in two years’ time.

“Luke’s got the ability to shift bodies at the breakdown and he gets through an enormous amount of work. You need guys like that in your team,” said Horwill.

“He does the things people don’t see, the work that can be unheralded. A lot of people spoke about the way Wales played an expansive game, one that’s very entertaining to watch. To be able to do that, you need the players to do the work, to do the boring stuff almost, that allows the other guys the space to work in.

“He could definitely be a Lion if you pick on recent form. There is a lot of rugby to be played between now and then and the Lions can pick from some pretty good locks…he’s a big asset to this Welsh team and he had a fantastic World Cup.”

Charteris’ absence from the RBS 6 Nations is an even bigger blow to Wales due to the fact that Jones is also a major doubt for the tournament due to a dislocated toe.

Davies started Saturday’s defeat to the Wallabies alongside Ian Evans of the Ospreys, with Gatland at least given some good news with the latter’s impressive display on his first international appearance since 2008.