Legendary Lions hooker Keith Wood tells lionstour.com - the official travel site for the 2013 tour - all about his memories of the last trip to Australia. [more] 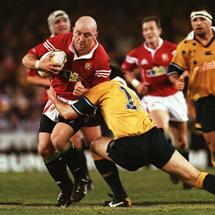 Legendary Lions hooker Keith Wood tells lionstour.com – the official travel site for the 2013 tour – all about his memories of the last trip to Australia.

Here’s a taster of what the former Ireland hooker had to say on a remarkable adventure Down Under and an incredible start to the Test series at The Gabba….

“We were down in the bowels of the stadium before the first Test in Brisbane and you could just hear this noise, like a train. We had no idea what it was but we knew it was special,” said Wood.

“It wasn’t until we came up those final few steps into stadium that we realised it was full of red – and it was magic. You were literally carried the last few steps.

“It shocked the Aussies as much as our performance did and I am sure the 2013 tour will be even bigger in terms of support.”

In order to ensure that Lions travelling fans gain the ultimate British & Irish Lions experience, the Lions have launched their own dedicated travel company – Lions Rugby Travel – who will supply official supporter tours to Australia in 2013.

The Lions depend on the travelling support as much as the players, and are sure to be backed by more fans than ever before in 2013, adding to the atmosphere and passion at each and every game.

With the Lions fixtures having now been released, the anticipation for the tour is building among fans and players alike.

Fans can now put one foot in Australia by securing their place with a Priority Access Pass. For just £250, fans can guarantee their place on the 2013 tour through lionstour.com where they will be able to book the exact tour experience they want when the packages are released in early 2012.

From a fully-escorted tour package that will get fans to the centre of the Lions experience and also showcase the wonderful delights Australia has to offer, to ‘Explorer’ (Flight and Ticket) packages, hotel and ticket options and the chance to create a bespoke tour experience, Lions Rugby Travel will provide Lions memories like never before.

To read the full Keith Wood interview and to watch the video, visit lionstour.com.