Gavin Henson is ready to take his first steps on the road to what he hopes will be a second Lions adventure in two years' time. [more] 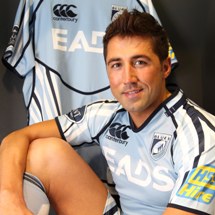 Gavin Henson is ready to take his first steps on the road to what he hopes will be a second Lions adventure in two years’ time.

The 2005 Lions tourist has been plagued by injury since returning from New Zealand six years ago and took an 18-month sabbatical from the game in the spring of 2009.

Henson signed for Saracens and then Toulon last season and was in line for a place in the Wales World Cup squad before a wrist injury again scuppered his chances of a fairytale come back.

The 29-year-old joined Cardiff Blues in October but has yet to make an appearance for his new team as he continues his recovery from injury.

But his lengthy wait for action is set to end this Friday after he was named in the Blues starting lineup for their festive clash with the Dragons at the Cardiff City Stadium.

“I just can’t wait to get back out there,” said Henson, who hasn’t played since Wales’ win over England back in August.

“It took so long for me just to get back on the training field and get the ball in my hands but it was good to do that. Now the next step is to be out on the field and to try and have a big influence on the game by getting involved as much as I can.

“I never deal with an injury very well. It was really bad timing and I nearly snuck in on that flight to New Zealand. It’s a tough road and you go to some dark places at times but, once you do get through it, you are stronger for it.

“I’ve been training hard so I’m hoping I’m up to the standard. I’m just glad to be back in the game. I did miss it and I’m loving every second of it now.”

Having publicly stated his desire to represent the Lions once more when they head to Australia in 2013, Henson knows that dream will never come to fruition unless he performs consistently well at club level.

And while a Wales recall is also high on his wish list, the reality TV star is fully aware that he may now be drinking in the last chance saloon as far as his professional rugby career is concerned.

“I’m kind of on trial. I’m playing for a contract here,” added Henson, who is only on a season-long deal with the Blues.

“I’m not getting any younger. I’ve got to make this work. I still want to feature for Wales, although that’s a long way off.

"Everyone knows I've been a little bit injury-prone over the last four or five years, so I'm not much of a signing to anyone. I’m very grateful the Blues gave me a chance.

"It's up to me now to repay that and just try and get that long-term contract with them.

“I was nervous a couple of weeks back but, with the training I’ve managed to get under my belt, I’m feeling pretty confident now. I just can’t wait to get out there on Friday and get my career started again.”

Henson has been picked at full back for the South Wales derby, with the Blues admitting they are still unsure as to where to utilise his talents in the long run.

Hamstring injuries to Chris Czekaj, Tom James and Richard Mustoe have meant a back three spot was deemed the best option for his return to the game this weekend and Henson is looking forward to what he expects to be a tough night at the office.

“I’m playing full back and I obviously haven’t played there for a while. But I’ve done all my skills in training, I’ve been working pretty hard and I’m hoping I can influence the game a little bit from back there.

“I’m going to be worked hard and it’s going to be a tough night. I’m sure they’ll test me because I haven’t had a lot of game time and I’m out of position.

“This is a tough team to get into. The backline’s being playing really well but luckily for me I’ve snuck in there and now I need to prove that I’m good enough to start the following week.

“Hopefully I can try and get a run of games and stay in a starting position. That’s my goal: I want to play week in, week out and I’m hoping I can do that. It starts with a massive performance on Friday night.”