Former assistant Lions coach Eddie O'Sullivan is interested in a role with the Ospreys. [more] 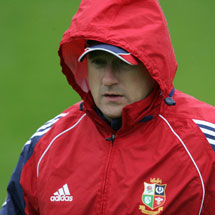 Former assistant Lions coach Eddie O’Sullivan is interested in a role with the Ospreys.

O’Sullivan, who was part of Sir Clive Woodward’s support staff on the 2005 Lions tour of New Zealand, has been out of the game since leaving his role as head coach of the United States last month.

The former Ireland boss decided not to seek to have his two-year contract with the Eagles renewed at the end of this year.

He has since had his name put forward for a role with England following Martin Johnson’s departure but is not among the favourites to take over permanently at Twickenham.

Yesterday’s announcement that ex-Wales coach Scott Johnson will be leaving the Liberty Stadium to join the Scotland set up at the end of the season has seen O’Sulliavn’s name brought back into the spotlight once again, however, with his manager admitting the 53-year-old would be keen on a move to Swansea.

"Unlike soccer, rugby will never be a global sport and there are a limited amount of potential clubs.

"Is Eddie available for a position with the Ospreys? Yes he is, 100 per cent."

Rumours in South Wales suggest that the Ospreys would be keen to promote from within, though, with head coach Sean Holley and assistant Jonathan Humphreys linked with possible promotions.

There is also no certainty that the Ospreys will even keep Johnson’s director of coaching position open, with financial conditions meaning the role may become redundant as the Welsh regions look to cut their cloth accordingly.