The future of English rugby is bright according to former duel code international Andy Farrell. [more] 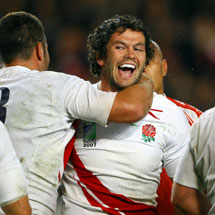 The future of English rugby is bright according to former duel code international Andy Farrell.

The Saracens coach, who is part of England's interim management set-up, believes the national side is spoilt for choice, with plenty of talent coming through the Aviva Premiership ranks.

Farrell saw his side inflict a fits league defeat of the season on table toppers Harlequins at a packed Twickenham earlier this week and there are plenty of players producing performances in the competition worthy of an international call.

"There are a lot of guys putting their hands up. It is going to be interesting during selection," said Farrell.

"We are spoilt for choice and that has to be an exciting thing, a fresh start for everyone and some exciting players to choose from. It is a feast for us at the minute.

"We have to get the balance right. Nobody gets a cap if they are not ready and we have got to make sure the balance of the team is right.

"Stuart Lancaster and Graham Rowntree are getting about the country and talking to a lot of people, seeing a lot of directors of rugby and a lot of rugby.

"I am watching the games week in, week out as far as my job is concerned here at Saracens. We keep meeting up every now and again, keep chewing the fat and it is good to talk."