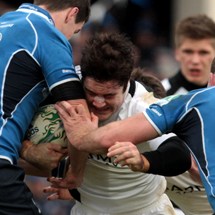 Saracens centre Brad Barritt has his sights set on England recognition this spring.

The 25-year-old South African-born star was one of his club’s most consistent performers in last season’s Premiership-winning campaign but he missed out on selection for the England senior side.

Barritt was ignored for the autumn internationals, RBS 6 Nations and the World Cup, with the likes of Mike Tindall, Shontayne Hape, Riki Flutey, Manu Tuilagi and even Toby Flood picked ahead of him in midfield.

But with new interim England coach Stuart Lancaster expected to take a fresh approach when he names his Elite Player Squad on January 11, Barritt could finally add to his one non-cap appearance for his adopted country.

"I'm hopeful of an England call-up and if one comes I'll take it with both hands. I'll be a very proud man," Barritt told Press Association Sport.

"I'm very ambitious in trying to attain some international honours. I'm very hungry to get an opportunity with England.

"Selection for international rugby comes down to just one man's opinion at the end of the day. I wasn't, in my opinion, given an opportunity but let's hope now with a new regime it could happen.

"I think I'm still relatively young in terms of rugby-playing age but I'd like to think my time has come.

"If I'm called up I'll be the happiest man in England."

Barritt knows England’s new boss better than most having worked closely with Lancaster in the Saxons set up.

Lancaster handed Barritt plenty of opportunities to impress for England’s second string and he is now crossing his fingers that relationship will be replicated for the first XV.

"I won six or seven Saxons caps under Stuart and really enjoyed the environment," added Barritt, who also hopes the likes of Sarries team-mates Owen Farrell, Andy Saull and Alex Goode get given a chance at the top table.

“He is very technically astute and there was a good camaraderie among the players.

"It will be a very happy environment – one in which I'm sure England will flourish.

"At Saracens we thrive on big opportunities and big occasions. Most guys across the whole team have put their hands up. Let's hope when selection time comes we are all given a chance."