Scott Johnson has faced an incredible verbal attack just days after agreeing a deal to become part of the Scotland coaching set up. [more] 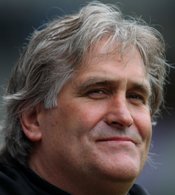 Scott Johnson has faced an incredible verbal attack just days after agreeing a deal to become part of the Scotland coaching set up.

Johnson will leave the Ospreys to work as an assistant to Scotland head coach Andy Robinson when his contract runs out at the end of the current season.

The former Wales boss has received plenty of praise for his role at the Liberty Stadium but his outspoken attitude has upset numerous critics during his time in Swansea.

Johnson recently criticised referee Nigel Owens for his use of Twitter, before claiming the Blues were the new ‘Galacticos’ of Welsh rugby ahead of their New Year’s Day derby.

The Ospreys beat the Blues 17-12 last night but Johnson came under heavy fire from Blues coach Justin Burnell, who even suggested Robinson would have a tough time working with his new man next term.

“Crikey, when we read or listen to things like that (Galacticos) in our camp we ignore them.

“What was it last week? Twitter, Nigel Owens. God knows what it will be this week before the Ospreys play the Dragons.”

Burnell advised Johnson to “get a life” and also slammed the narrow style of play he believes the Ospreys are currently favouring.

The Ospreys have scored just 19 tries in 12 league games this season and have yet to pick up a try-scoring bonus point.

And with the likes of Lions stars Tommy Bowe and Shane Williams out wide, Burnell believes the Ospreys tactics are far from flattering.

“They seem to have gone away from using Shane Williams and Tommy Bowe, who have got some outstanding attacking flair,” added Burnell.

“We all know they are world-class players but the Ospreys don’t play a wide game any more.

“They’ve got one major strength – their scrum. It’s as if they have just closed their game completely down just to get to a scrum. It’s pretty negative to be honest with you.

“Saracens managed scrum-time and took their game away from them. It’s disappointing when you see world-class talents like Shane and Tommy being ignored.”