Cueto out in the cold 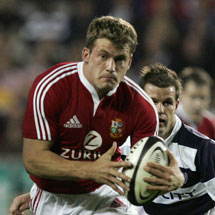 Former Lions tourist Mark Cueto has admitted he won’t feature for England in the RBS 6 Nations.

Cueto was an England regular under Martin Johnson but has been told by new interim boss Stuart Lancaster that he will be surplus to requirements when the new Elite Player Squad is named on January 11.

“I’m not sure if I should be saying this, but I met Stuart,” said Cueto, who was a Test Lion in New Zealand six-and-a-half years go.

“Fair play, he came to Manchester and we had a long chat about everything. He honestly explained the road he’s going down in terms of selection, so I know I’m not going to be part of the 6 Nations.”

Cueto’s omission is not a major surprise given Lancaster’s determination to build towards the 2015 World Cup.

Test veterans Lewis Moody, Jonny Wilkinson and Steve Thompson have announced their retirements from the international scene, while Mike Tindall seems certain to miss out on selection.

But although critics would suggest this is the end of Cueto’s 55-cap England career, the 32-year-old is hopeful he may yet get another chance to represent his country.

Lancaster’s contract only takes him up to just before the summer tour of South Africa and Cueto feels his prospects may improve if a new full-time coach is brought in ahead of the ex-Leeds boss.

“Now that I know I won’t be involved in the Six Nations, it’s not a case of me putting my hand up and saying I’m going to retire from international rugby,” added Cueto.

“As I said to Stuart, if England still wanted me to play I still feel I can play at that level. I feel as if I’ve still got a lot to give.

“You don’t know who is going to be in charge (after the RBS 6 Nations]. All the talk is that Stuart is going to be the interim head coach until the end of the season, then the RFU are going to appoint someone else.

“England are going out to South Africa in June, which will be quite a big tour, so who knows what might happen? There might be a place on that for the more senior, experienced guys.”