Lions legend Richard Hill believes there could still be a place for his old team mate Brian O'Driscoll on the 2013 tour to Australia. [more] 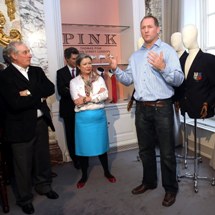 Lions legend Richard Hill believes there could still be a place for his old team mate Brian O’Driscoll on the 2013 tour to Australia.

Former Saracens and England flanker Hill toured Australia and New Zealand with O’Driscoll in 2001 and 2005 and is backing the Irish skipper to join the elite rank of players who have made four tours with the Lions.

Hill was in the side that won the first game in the three-match series against the Wallabies in Brisbane in 2001 when O’Driscoll marked his Lions Test debut with a wonder try. That victory set-up a thrilling series which the Wallabies eventually won 2-1.

“I’m sure that Brian and Paul O’Connell will be harbouring thoughts of making another trip with the Lions and I would be very surprised if anyone ruled themselves out of contention over the next 18 months,” said Hill.

“Brian is going through a period of rest and rehabilitation at the moment which means then when he returns at the end of the season there will only be a year left to go before the Lions head Down Under.

“I’m sure his desire and passion to play for the Lions won’t have diminished and I’m certain he would want to go on tour again. It’s key the Lions have senior and experienced players within their squad and, if Brian is playing well enough, then I can’t see any reason not to consider him.”

Hill, speaking in London at the announcement of Thomas Pink as the official outfitter for the next Lions adventure, won six caps for the Lions on three tours and was an inspirational figure in the 1997 victory over the Springboks – the last time the Lions won a series.

O’Driscoll made his third tour with the Lions in South Africa in 2009 and will be 33 later this month. But he proved during the World Cup he has lost none of his class and, providing he returns to full fitness and effectiveness following his shoulder surgery, he is bound to be a contender for a place on the plane to Australia.

But while O’Driscoll has 14 appearances, including six Tests, from his three tours to date, McBride has an all-time high of 68 matches and 15 Tests from his five tours with Gibson not far behind on 66 games and 10 Tests.

The last two series in Australia have both ended up as 2-1 triumphs – for the lions in 1989 and the Wallabies in 2001. Hill is predicting another tight tussle and would love to see the combined side winning a series for the first time in 16 years.

“Back in 2001 in Australia we certainly put ourselves in a great position by winning the first Test. That was one of the best and most memorable games of my career,” said Hill.

“We seemed to be putting ourselves into a good position in the second Test, but the Wallabies hit back and then went on to win the third as well. There is obviously an importance to winning, but it is just as important to be competitive.

“That was certainly the case in 2001 and in South Africa in 2009. The Lions would have found themselves in a difficult position if the 2009 tour hadn’t been such a success both on and off the field.”

As for the Lions’ chances on next year’s 125th anniversary tour, Hill believes there is enough young talent around to challenge the Wallabies in their own back yard. And he also believes the next 18 months, and two RBS 6 Nations tournaments, will bring through a host of new contenders for tour places.

“I don’t believe anyone really knows what to expect until they have experienced a Lions tour for themselves. Everyone completely forgets what has gone on before between the four nations and the players blend into a collective unit.

“There is a huge hunger and desire to see the Lions win and the support is simply phenomenal. The fan base has grown since 2001 and Australia are expecting up to 50,000 Lions fans to follow the tour in 2013.

“Will they see a series winning Lions side? There is certainly enough young talent across the four nations and there will be other names springing up over the next 18 months.

“It is going to be a hugely exciting and competitive series and I just hope I am there to see it.”

Hill joined fellow Lions Gareth Edwards, Roger Baird and Rob Henderson in London on Monday, January 10 as the world’s most famous touring team joined forces with one of the globe’s most respected formal outfitters.

Thomas Pink will provide the official formalwear looks for the 2103 tour, including the emblematic blazer, tie and unique evening wear that epitomizes the British style of the iconic Jermyn Street based shirt maker.