The search for the next Lions coach will gather pace during the forthcoming RBS 6 Nations says Lions CEO John Feehan. [more] 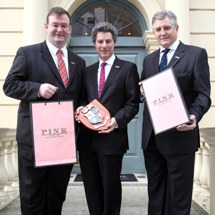 The search for the next Lions coach will gather pace during the forthcoming RBS 6 Nations says Lions CEO John Feehan.

Feehan, team manager Andy Irvine and chairman Gerald Davies made it clear at the fixtures announcement late last year that the time was fast approaching to decide who would take the reigns when Britain and Ireland’s elite head to Australia in 2013.

And Feehan has now confirmed that the committee hope to have a head coach in place by late spring, with Ireland boss Declan Kidney, Scotland supremo Andy Robinson and Wales coach Warren Gatland the early favourites with the bookies.

England interim boss Stuart Lancaster is a rank outsider for the job but even he could be considered in some coaching capacity if England excel next month.

"You don't have to be a genius to work out who the candidates are so we will keep an eye on them and see how well they do in the 6 Nations," said Feehan, speaking as the Lions announced that Thomas Pink will be the official suppliers of formalwear for the tour Down Under.

"All of those people are committed to wanting to do it, which is fantastic. It really comes down to performance now and who we feel will work best.

"We won't rule a coach out if he hasn't [got Lions experience] but clearly the more experience, the better.

"The big problem with Lions tours is that you have to get it right from day one. There are no second chances so if a guy understands that and understands the ethos that needs to be built up with the players and the management, it helps.

"It is a definite bonus to them but a coach is more than just experience. There are one or two candidates who haven't been on a tour before and I have no doubt that they can bring their own insights and own intuition into the situation."

Lions legend Sir Ian McGeechan led the tourists in South Africa last time out and Feehan hasn’t ruled out approaching the veteran Scot if needs be.

And while he hinted in 2009 that he wouldn’t be putting himself forward for yet another Lions adventure, the current director of rugby at Bath could be asked to consider his position.

"If we were stuck at the end of the day and we didn't think any of the coaches were appropriate then we might ask Geech to reconsider his position. Lots of people say 'never again'," added Feehan.

"Geech is still a viable option if he so chooses. We haven't had that discussion and probably won't in the event that a candidate makes himself clear.

"But Geech is probably the best servant the Lions have ever had and we value his views and opinions so he will have an input on where the coaching position goes."

The final decision on who leads the next pride of Lions will be made by the four-man Lions Board made up of representatives from each of the Home Nations.

Tom Grace of Ireland, John Spencer of England and Irvine and Davies of Scotland and Wales respectively are expected to announce their joint decision sometime in April.