Scotland have been dealt a heavy blow with the news that Moray Low will be sidelined for eight weeks. [more] 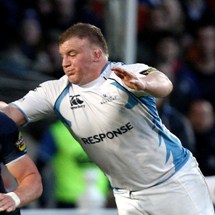 Scotland have been dealt a heavy blow with the news that Moray Low will be sidelined for eight weeks.

The Glasgow Warriors tighthead damaged a medial collateral ligament in his knee during Saturday’s RaboDirect PRO12 defeat to against Scarlets in Llanelli.

Low will miss the first three rounds of the RBS 6 Nations, starting with the tournament opener against England at Murrayfield on February 4.

The 27-year-old will also be unavailable for the games against Wales and France and faces a race against time to be fit for the trip to Ireland on March 10.

The injury is a second setback in quick succession for Low who picked up a calf problem on his return from the World Cup, where he was the only member of Andy Robinson’s squad not to see action.

"This is clearly very disappointing news for Moray, and the injury has come at a very unfortunate time," said Glasgow head coach Sean Lineen.

"He's a tough character, however, and I know he'll work hard to bounce back strongly."

Low’s immediate absence may lead Robinson to call up Edinburgh’s three-times capped Kyle Traynor who usually plays on the loosehead side of the scrum.

It causes particular problems for the clashes with Wales and France as those games take place on a Sunday, meaning Low’s fellow tighthead Euan Murray will be unavailable due to his religious beliefs.

There was some good news for Robinson, though, after it was announced that starting fly-half Ruaridh Jackson will return to action shortly.

There had been concerns that Jackson, who was injured in the same match as Low, would miss at least some part of the 6 Nations but the 23-year-old could yet feature in Glasgow’s crucial Heineken Cup encounter with Leinster this Sunday.