Poor old Jack not in Pink

You wonder what poor old Jack Clowes would have made of the announcement that the 2013 British & Lions will be 'dressed' by the exclusive British shirt-maker Thomas Pink. [more] 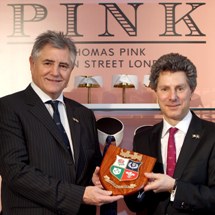 You wonder what poor old Jack Clowes would have made of the announcement that the 2013 British & Lions will be ‘dressed’ by the exclusive British shirt-maker Thomas Pink.

Each member of the 125th anniversary tour party will be kitted out with two exclusive outfits- a No 1 dress of classic Lions blazer and flannels and a No 2 de rigeur for smart evening wear. There will be shirts, shoes, socks, underwear, hankies and suit carriers.

"Thomas Pink’s stated ambition is to make the British & Irish Lions tour party look and feel the best dressed sports team in the world. That is a fantastic ambition and they have made the players their No 1 priority," explained 2013 Lions tour director of operations, Guy Richardson.

"Their’s is a fantastic story and their products are truly world class. I’m sure the players and management will feel as good as they will look when we head to Australia in 18 months time."

Turn back the clock almost 125 years and we return to poor old Clowes, the Halifax and Yorkshire forward who signed up to play on what is now recognised as the first Lions tour to New Zealand and Australia in 1888.

Organised by two professional cricketers, Arthur Shrewsbury and Alfred Shaw, the tour didn’t receive the official backing of the RFU and there were financial inducements offered to the players to make the trip.

The eight month adventure involved 54 matches all tolled for the 22 players, 35 under rugby union laws and 19 under Victorian, or Aussie Rules.

But while Clowes made the boat, the SS Kaikoura, in Liverpool on March 8, he also found himself banned from taking any part in the tour by the RFU. He received notification of his fate as he stood at the quayside getting ready for departure.

And the reason? He accepted, and openly admitted receiving, a £15 pre-tour allowance to buy kit and clothing for the next 32 weeks!

A grudge between Dewsbury and Halifax led to Clowes’ undoing. He played in a Yorkshire Cup second round tie for the side that beat a Dewsbury team that had withdrawn Lions tourist Angus Stuart because their President, Mark Newsome, knew all about the pre-tour advance.

As soon as Dewsbury had lost the match an appeal was lodged against the result on the basis Halifax had played a professional – Jack Clowes. The Yorkshire committee summoned Clowes to appear before them and challenged him on the £15 allowance.

He openly admitted he had accepted the money and offered to pay it back immediately. It didn’t work and he was banned from playing by the RFU as he got on the boat.

There were appeals to try to get the ban lifted, but none was successful while the tour took place. It meant Clowes was left as "a dead head", in the words of Shrewsbury, and spent a lot of the time away with his brother in Sydney.

Had he played he would have professionalised everyone in his team. When the party returned the RFU asked each player to sign a declaration they had not received payment for playing, other than legitimate expenses.

They all did so and the RFU accepted their word. Had they not, and carried out a full investigation, they would probably have had to ‘professionalise’ one of their greatest players, the England rugby and cricket captain Andrew Stoddart.

Clowes was also permitted to play again after the tour, but he had missed out on one of the greatest rugby adventures in the history of the game up to that point.

If only Shrewsbury and Shaw had been able to find an outfitter like Thomas Pink back in those days. Then the row would not have arisen.

Successive Lions touring teams have been kitted out since the 20th century and three times tourist, Gareth Edwards, was on hand at the official launch of the Thomas Pink sponsorship to offer his views on the traditions of the famous kit.

"I brought up some old tour blazers, which brought back a load of great memories. Playing for the Lions is the pinnacle of any player’s career, so when you look at the blazer and the badge it links the four countries and represents a huge amount of history and tradition," said Edwards.

When you put on a Lions blazer it is more than putting on a garment – you are clothing yourself in more than 100 years of rugby history. I just wish I was a bit younger and could be part of it all again.

"I think the Thomas Pink concept is great and it is obvious that an enormous amount of hard work is being put in to make sure that this special garment will be wonderful to wear. I firmly believe that if you feel good in what you wear, you play well."