Wales will be without hooker Lloyd Burns for the RBS 6 Nations. [more] 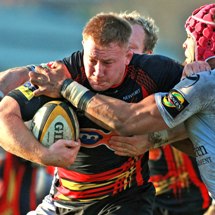 Wales will be without hooker Lloyd Burns for the RBS 6 Nations.

The Dragons No2 is facing an immediate three-month absence due to a neck injury.

Burns shot to prominence in the 2011 World Cup in New Zealand and had been expected to challenge for a spot in the squad for the tournament opener with Ireland in just over three weeks’ time.

The 27-year-old will instead be sidelined until mid-April, meaning he will play no part in Wales’ bid to back up their semi-final showing Down Under with a first 6 Nations title in four years.

“Lloyd has been advised to withdraw from rugby for at least three months in order to fully rehab his neck,” said Dragons director of rugby Robert Beale.

“We are obviously disappointed for Lloyd, particularly with the 6 Nations coming up, but Lloyd’s safety and welfare has to be paramount.”

The absence of Burns leaves Huw Bennett, Richard Hibbard and Ken Owens fighting it out for Wales’ reserve hooking spot, with 2009 Test Lion Matthew Rees expected to be handed a starting berth in Dublin having recovered from a neck injury of his own.

Rees missed the World Cup to have surgery on the issue, while Hibbard’s ankle injury in the summer win over Argentina helped Burns complete a remarkable rise from second-grade Principality Premiership to Test status in just 18 months.