Newcastle have parted company with Alan Tait and appointed Gary Gold as their new director of rugby. [more] 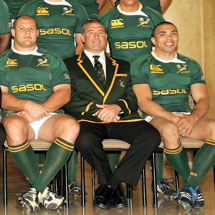 Newcastle have parted company with Alan Tait and appointed Gary Gold as their new director of rugby.

Tait, a former Lions hero, had been under huge pressure following his side’s defeat to Exeter at the weekend – a result that left them nine points adrift at the bottom of the Aviva Premiership table.

The ex-Scotland centre will take a break from rugby after a disappointing season-and-a-half spell in charge at Kingston Park but the remainder of his backroom staff will keep their jobs.

Gold has spent the past four years as assistant coach to Peter de Villiers with the Springboks – a period which saw him taste Tri Nation success and a series victory over the Lions in 2009.

He had been touted as a possible successor to de Villiers after the South African Rugby Union invited applications for the head coach role but the former London Irish and Western Province boss has made a surprise move to the UK instead.

“This is an exciting challenge and I am delighted to have the opportunity to work in the Aviva Premiership,” said Gold.

“Newcastle Falcons is a big club with big ambitions and an owner who is very determined, so anything is possible.

“I know a lot about the players and the traditions of the club so I am really looking forward to the challenge of keeping top-flight rugby in the North East.”

Ford joins the Falcons just weeks after leaving his post with England following a disappointing World Cup in New Zealand.

An assistant coach on the 2005 Lions tour, Ford held the head coach role at Saracens prior to his call up to the international fold in May 2006.

“I would like to welcome Gary and Mike to the club. They will be a great asset alongside the existing coaching team and this is a demonstration of our intent to fight back and secure our Aviva Premiership status,” said Kurdi.