Legendary Lion Bill Beaumont is keen to become the next chairman of the Rugby Football Union. [more] 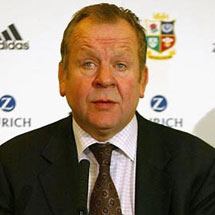 Legendary Lion Bill Beaumont is keen to become the next chairman of the Rugby Football Union.

Beaumont, who captained the Lions in South Africa 32 years ago, could be unopposed in running for the role due his popularity within the game.

The 2005 Lions tour manager recently attempted to become the chairman of the International Rugby Board but narrowly failed to defeat the incumbent Bernard Lapasset after the initial vote was postponed until last month.

The RFU have been without a permanent chair since Martyn Thomas stood down in July and Beaumont’s potential appointment would be seen as another step in the right direction by those hoping England will return to their roots ahead of the 2015 World Cup.

"I will allow my name to go forward. If people within the union feel that I could do a good job, then I think so as well," Beaumont told BBC Radio 4.

"I don't know if being a former top player qualifies you to be good at administration but I'd like to think that I've got something to offer.

"These are exciting times to move forward. We've got a build-up to a World Cup in 2015, which will be absolutely outstanding, but there are a lot of important decisions to be made before that happens."

As well as leading the Lions in South Africa, Beaumont skippered England to Grand Slam success in 1980 and won a total of 34 caps for his country, with 21 of them as captain.

His experience at the very highest level of the game and his passion and understanding of the sport are likely to work in Beaumont’s favour, particularly after the RFU appointed a non-rugby man in former Lawn Tennis Association boss Ian Ritchie as its new chief executive.