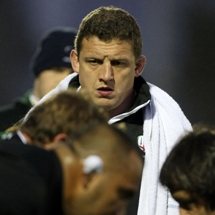 Shingler is currently embroiled in an eligibility row after being named in Scotland’s squad for the RBS 6 Nations.

The International Rugby Board is currently investigating the matter but Booth hopes Shingler will be free to represent Scotland when they face England at Murrayfield on February 4.

“Common sense must prevail. Why are we trying to stop people reaching their full potential?” said Booth, who signed Shingler from the Scarlets last summer.

“If Wales don’t think they want him and Scotland do and he wants to play international rugby, we’ll back that decision.

“The IRB will decide but we try and make players the best player they can be and the pinnacle for every player is playing international rugby.

“He cares about it a lot and he’s very passionate about it – that’s what drives people to excel.

“This is about Steve trying to be an international rugby player. He just wants to play AT the best level he can. It’s not a choice he’s come to easily but one country’s shown an interest and another hasn’t.”