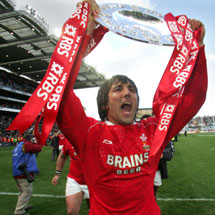 Henson helped Wales secure the Grand Slam in 2005 and 2008 and returned to Test duty in the build-up to the 2011 Rugby World Cup before a wrist injury wrecked his dreams of finally playing at the global tournament.

Despite the retirement of Shane Williams, the non-selection of 100+ capped stars Stephen Jones and Martyn Williams and an injury to Alun Wyn Jones, Gatland, who was forwards coach on the 2009 Lions tour to South Africa, has still been able to name 11 Lions in his squad that will head to Gda?sk, Poland, next week to prepare for the championship.

Cardiff Blues back row man Sam Warburton has been named as skipper for the competition and there are six uncapped players hoping to earn their big breakthrough over the next two months – the Ospreys pair of Ashley Beck and Rhys Webb, Scarlets trio of Liam William, Rhodri Jones and Lou Reed and teenage Blues wing Harry Robinson.

Saracens prop Rhys Gill earns a recall to the squad after his impressive form for the English champions this season and French-based trio of Lee Byrne, James Hook and Mike Phillips also feature.

Wales kick-off with a re-match of their World Cup quarter-final against Ireland at the Aviva Stadium on Sunday, 5 February.

“We’ve had to strike a balance with this squad, the majority are those players who excelled for Wales during the Rugby World Cup, but are also taking the opportunity to look at one or two youngsters before probably cutting our numbers even further before the start of the RBS 6 Nations,” said Gatland.

“We have kept a couple of older heads and we have injuries, with Alun Wyn Jones, Josh Turnbull, Rob McCusker and Luke Charteris all unavailable to us, but the emphasis on development and planning for the future is there for everyone to see.

“These are exciting times for Welsh rugby, we showed a huge amount of potential at the Rugby World Cup in New Zealand and we will be working as hard as humanly possible to ensure that we reach our potential in this year’s 6 Nations championship.”