Lions tourist Leigh Halfpenny is well on his way to becoming an international-class goal kicker according to his club coach. [more] 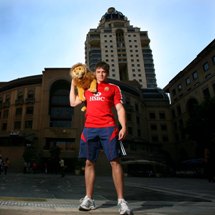 Lions tourist Leigh Halfpenny is well on his way to becoming an international-class goal kicker according to his club coach.

Halfpenny has often been used as a long-range kicker by Cardiff Blues and but could soon be holding a more prominent kicking role for club and country.

Despite the presence of Scottish points machine Dan Parks, Halfpenny has been handed responsibility from the tee for the Blues in recent weeks.

Halfpenny kicked 17 points and missed just one shot at goal during Saturday’s vital Heineken Cup win over London Irish in as he bounced back from a glaring miss in the previous week’s narrow defeat to in the RaboDirect PRO12.

“The victory against London Irish was not least down to Leigh Halfpenny and his kicking,” said Baber.

“Because you’ve also got someone of the ilk of Dan Parks on the pitch, as a coach you have conversations with them (as to who should take on the kicking duties).

“But what Justin, myself and the whole team are trying to do is develop players, not only for ourselves but also as they progress through their careers as well.

“I thought it was vitally important for Leigh to be given the opportunity to put that miss against to rest and he did that.

“It’s more experience for him and it drives him on to be a better player.”