No fear for Cockerill

Leicester Tigers boss Richard Cockerill is convinced his job is safe despite a humiliating Heineken Cup defeat to Ulster on Friday night. [more] 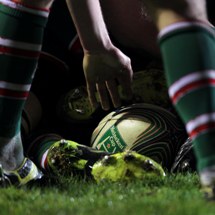 Leicester Tigers boss Richard Cockerill is convinced his job is safe despite a humiliating Heineken Cup defeat to Ulster on Friday night.

The Tigers suffered their biggest European reverse as they were beaten 41-7 at Ravenhill to crash out at the pool stages for just the fifth time in 15 seasons.

The nature of the result has left Cockerill fending off questions surrounding his future but the former England hooker has no worries about his contract being terminated.

"If I get the sack because we didn't qualify I cannot control that. But, as far as I am aware, I have the full support from the chairman, the players and the rest of the coaches," Cockerill told the Leicester Mercury.

"Sometimes you get beaten. In the world we live in, people want to know why you got beaten and if you are going to get the sack because you lost.

"It's sport – you get beaten. Sometimes, you don't play as well as you should. But if you are going to get sacked every time you play badly, there would be nobody left in the business."

Cockerill has an impressive record as head coach and director of rugby since taking over the reigns in 2009.

A brace of English Premiership titles and an appearance in the Heineken Cup Final three seasons ago is proof of his success at the club he represented for so long as a player.

And until the battering in Belfast last weekend, the Tigers had lost just once in 12 competitive fixtures since welcoming their international stars back from World Cup duty.

"Look at my record. There is not a better record over the last three or four years in the Premiership than mine," added Cockerill.

"In the three years that I have been in charge, we have finished top of the table three times. Last year, we scored the most tries in the competition and the two years before that, we were second highest try-scorers.

"I have taken our side to a European final too so that is four finals in three seasons.

"I know I am working as hard as I can and the only pressure I feel is the pressure from myself because I want us to be good. But I have a thick skin and I know that I am good at what I do."