It won’t be the same without Brian

Ireland coach Declan Kidney admits Brian O'Driscoll will be a hard man to replace when the RBS 6 Nations kicks off next week. [more] 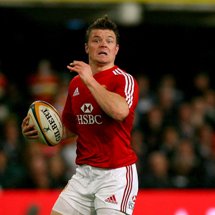 Ireland coach Declan Kidney admits Brian O’Driscoll will be a hard man to replace when the RBS 6 Nations kicks off next week.

Lions legend O’Driscoll will miss the entire tournament due to a shoulder injury that required surgery.

The 33-year-old’s absence has been a major talking point ahead of Ireland’s opener against Wales in Dublin on February 5, with pundits unclear as to who will wear the famous No13 shirt at the Aviva Stadium.

Kidney insists he is now fairly certain who will attempt to fill O’Driscoll’s shoes but he isn’t attempting to disguise the fact that Ireland won’t be the same without their talismanic skipper.

"I have a fair idea in my mind who will replace Brian," said Kidney, who refused to give anything away publicly at the 6 Nations launch in London yesterday.

"Keith Earls, Fergus McFadden, Tommy Bowe and Andrew Trimble have all played well there in the past.

"It won't be a like for like replacement but there are different combinations available. There's even the option of having Paddy Wallace and Gordon D'Arcy there, too.

"Brian hasn't been too willing to give the jersey up. Everyone's wondering what does the jersey feel like because he's had it for so long.

"You don't lose one of the best players in the world and think it will be the same."