Mike Brown insists the mood within the England camp is a really positive one as they look ahead to their first game since the controversial World Cup campaign. [more] 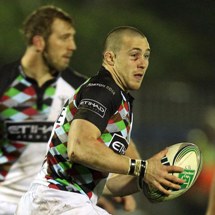 Mike Brown insists the mood within the England camp is a really positive one as they look ahead to their first game since the controversial World Cup campaign.

England crashed out at the quarter-final stage in New Zealand after the team hit the headlines for all the wrong reasons.

Off-field problems and leaked post-World Cup reports saw the squad face a mountain of criticism and led to team manager Martin Johnson deciding not to continue in his post.

But now Brown, who wasn’t part of the World Cup squad, says Stuart Lancaster’s 6 Nations training camp couldn’t be a better place to be.

“The atmosphere’s amazing,” Brown, who has three senior caps to his name but hasn’t featured since 2008, told the RFU’s podcast.

“We’ve been told all the places are up for grabs but I’m just focusing on myself, how I’m training and what I need to do for this team and I think everybody else is doing the same.

“It’s a short time together but we’ve gelled really well over the last couple of days and hopefully we can keep going with that.

Brown won his England recall on the back of a series of outstanding performances for Premiership pace setters Harlequins as Conor O’Shea’s men began the season with a incredible 14-game winning run in all competitions.

The Londoners have stuttered slightly over the past two months, however, losing twice in the league to Saracens and Northampton and crashing out of the Heineken Cup despite a famous win in Toulouse.

But while Quins’ form has dipped somewhat, Brown’s individual performances have never really faltered. England’s Mr Consistent so far this year, Brown was named the Aviva Premiership Player of the Month last time out.

The 26-year-old would be a shoe in for a starting spot were it not for the equally sensational form of Northampton’s Ben Foden – a player Brown knows well from his time in the England junior ranks.

Brown claims club matters have no affect once players get into an international camp, however, and, even though Foden looks set to pip him to the No15 shirt, he insists that competition for places can only be a good thing for English Rugby.

“It’s been a difficult month for Quins but we’ve responded positively every time we’ve lost and hopefully we can do that again. It hasn’t really affected me. I’ve just been focusing on what I need to do on and off the field and I’ve been working hard on my game. Now I’m here, I’m fully focused on performing for England,” added Brown.

“I’m not a new boy or an old boy in the England group, I guess. It’s been a while since I’ve been involved and I’ve been desperate to get back in here. I’m loving it at the moment.

“Ben’s a brilliant guy. I’ve known him since our U21 days so we’re good friends because of that. There’s a friendly rivalry and that’s a good thing. That’s what you want in every position. That’s going to make the England team better as it pushes us to improve on the training field and on the pitch.”