Delon Armitage has been suspended from the England Saxons squad after his arrest for an alleged assault. [more] 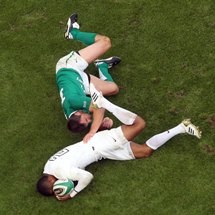 Delon Armitage has been suspended from the England Saxons squad after his arrest for an alleged assault.

The London Irish full back played for England’s second string in the 23-17 win over the Irish Wolfhounds on Saturday night but was arrested by Devonand Cornwall Police in Torquay on Sunday.

"In the early hours of Sunday, January 29, 2012 a 28-year-old man from the Middlesex area was arrested in Torquay on suspicion of assault following an altercation in a local nightclub," read a police statement.

"The man was taken to Torquay police station and interviewed regarding the incident. He was later released on police bail until March 21, 2012 while investigations continue.

"A local man received a split lip during the incident but did not require medical treatment."

Armitage will now await further investigation before learning his fate but England boss Stuart Lancaster has decided to axe him from the Saxons EPS until the police decide on their next course of action.

Although Armitage had previously been dropped from England’s senior squad in favour of Harlequins’ inform 15 Mike Brown, the news is a big blow for Lancaster who is attempting to repair England’s battered public image.

Off-field issues and damaging headlines during the global gathering in New Zealand, plus the problems surrounding a leaked post-World Cup report, tarnished the reputation of the Rugby Football Union and Lancaster has repeatedly spoken of the need to reconnect with the English public.

"We take issues surrounding the behaviour of England players very seriously and as such have decided to suspend Delon from the Saxons EPS pending the result of the police inquiry. We will then consider if further action is appropriate under the EPS Code of Conduct," said Lancaster.

"High standards of behaviour are required from England players on and off the field, and they also need to understand that they should not put themselves in a potentially vulnerable position or environment."

The episode is the latest in a string of controversies surrounding Armitage, who was recently singled out by former Lions coach Andy Robinson as an example of supposed English arrogance after the World Cup win over Scotland.

Armitage spent plenty of time on the sidelines last year, with a high-profile altercation with a doping officer one of four separate suspensions he received in 2011.

The 26-times capped versatile back has been heavily linked with a switch to French giants Toulon and this latest spell in the spotlight may quicken that process, with London Irish backing the RFU in their tough stance on player discipline.

"We fully understand the RFU stance on this matter and will convene our own internal investigation to procure a full understanding of the matter in question, the outcome of which will determine any further action," was the Exiles’ response in a club press release.

"Player conduct is a direct representation of the club and, therefore, inappropriate conduct will be strongly acted upon."