England have called up Thomas Waldrom and Matt Banahan into their 6 Nations squad. [more] 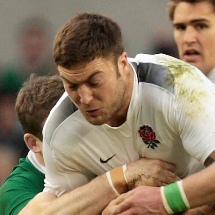 England have called up Thomas Waldrom and Matt Banahan into their 6 Nations squad.

Waldrom and Banahan come into the EPS in place of injured Gloucester duo Luke Narraway and Henry Trinder.

No8 Narraway and centre Trinder have returned to Kingsholm for treatment on respective calf and ankle problems.

Both Gloucester men had missed out on original selection for the senior squad but had themselves been called up as injury cover for Tom Wood and Manu Tuilagi.

Banahan and Waldrom played for the Saxons in Saturday’s win over the Irish Wolfhounds.

Bath utility back Banahan started on the wing but has also been used as a centre, while No8 Waldrom was a try scorer for the second string at Sandy Park.

Former second row Banahan and New-Zealand-born No8 Waldrom were both part of the World Cup squad Down Under and will now look to push for a place in the matchday 22 for the trip to Murrayfield to face Scotland on Saturday.