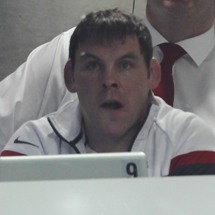 Former England forwards coach John Wells has joined Newcastle Falcons until the end of the season.

Wells spent six years with England before leaving the Rugby Football Union in the wake of a disappointing World Cup campaign.

Wells will work under the club’s new director of rugby Gary Gold, with the ex-Springbok assistant having taken the reigns from Alan Tait until the close of the current campaign.

“I am delighted that John Wells has decided to come on board with the club. He is a world-class coach with a wealth of experience and he had a fantastic effect during his time at England,” said Gold, who guided South Africa to series success over the Lions in 2009.

“His appointment is a real demonstration of intent from club owner Semore Kurdi about the importance of keeping top-flight rugby in the North East.

“It is going to be a difficult job to keep Aviva Premiership rugby in the North East and we are in an unfortunate position in the league but we must focus on what we can control.”

Before working with England, Wells was head coach at Leicester and led the Tigers to the Premiership Final and the last four of the Heineken Cup in his first season in charge.

He joined the England set up in 2006 and was involved in two World Cups, working under three coaches in Andy Robinson, Brian Ashton and Martin Johnson.

As a player, Wells captained Leicester from 1991-93, leading his side to Pilkington Cup glory in 1993 – their first Twickenham triumph in 12 years.

“This is a great opportunity for me and I am looking forward to the challenge of helping the club secure its top-flight status,” said Wells.

“Newcastle Falcons is a big club which should be challenging for European Cups and Premiership titles. I am used to working in pressurised environments when every game is a cup final and that is the case between now and the end of the season.”