Ross Ford says he wants to follow in the footsteps of another Lions tourist when he leads Scotland out against England this Saturday. [more] 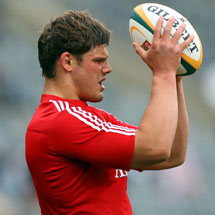 Ross Ford says he wants to follow in the footsteps of another Lions tourist when he leads Scotland out against England this Saturday.

Ford has been appointed Scotland skipper for this year’s Six Nations campaign which starts with a mouth-watering Murrayfield clash with the Auld Enemy.

The Edinburgh hooker and 2009 Lion has been in outstanding form this season as his club side forced their way into the Heineken Cup quarter-finals but he is not known for being one of the game’s biggest talkers.

A softly-spoken man of actions rather than words, Ford intends to mirror the captaincy style of 2005 Lion Jason White by leading by example this weekend.

“Jason is somebody I really look up to. He was not a massive speaker, but when he did speak it really meant something,” said Ford.

“He didn’t do it just for the sake of it – he would back up what he said by leading by example.

“That is something I really respect and want to do myself on Saturday. That’s how I want to captain the team.

“You don’t have to shout and roar. Everybody is up for the game. I just want to get a few points across. Once you hit the pitch, you see what the captain is doing and follow his example.”

Scotland head into Saturday’s fixtures looking for revenge for the narrow defeat that dumped them out of the World Cup at the group stages for their first time in their history last October.

Andy Robinson’s men were hugely disappointed to have headed home early from New Zealand but the general consensus is that Scottish Rugby is heading in the right direction.

A two-Test series win in Argentina the summer before last and a superb success against South Africa the previous year are examples of Scotland’s potential and Ford says now is the time to bring consistency to the fore and challenge for a first Six Nations crown.

“I think it's about time we delivered,” added Ford.

“We have had a lot of really good one-off wins. It is about time we delivered in a championship and that has to start on Saturday.

“We need to build our energy through the things we do well. I have been in games where things are really going well, when you are buzzing and feel unstoppable. If you can get that energy into a squad it is a massive thing to have on your side.

“We want everyone taking responsibility for what they do during games. And not just during a game, but every time we go out on a pitch. Those standards have to be there to improve ourselves and challenge teams.

“That is the way we want to play. We want to push ourselves and go forward. Those are the things I have been going on about and will go over again on Saturday.”