England started their 6 Nations campaign with a win as they downed Scotland 13-6 at Murrayfield. [more] 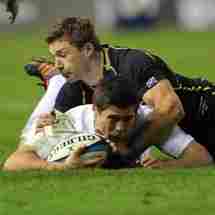 England started their 6 Nations campaign with a win as they downed Scotland 13-6 at Murrayfield.

A Charlie Hodgson try just 30 seconds after half time handed Stuart Lancaster a winning start to his England coaching career but Scotland will feel like they should have been celebrating at the end of an emotional 80 minutes.

The home team dominated possession and territory for large periods, with England making nearly double the number of tackles, but an inability to take their chances cost them dear yet again.

A Ross Rennie break that should have lead to a try for 2009 Lion Mike Blair was the most glaring miss but it was Scotland’s failure to hang on to possession in the final third that became the central theme of the latest instalment of Calcutta Cup action.

Scotland led 6-3 at the break thanks to a brace of Dan Parks penalties to one from Owen Farrell but the Scotland No10 then saw his clearance kick charged down by opposite number Hodgson moments after the restart.

The 2005 Lions tourist pounced on Parks’ mistake to dot down the bouncing ball 10 metres to the right of the posts, with debutant centre Farrell adding the extras to move England 10-6 in front.

Scotland piled on the pressure for the rest of the half but England stayed disciplined throughout and a second successful penalty from their Saracens youngster made it 13-6 in England’s favour with six minutes left.

Earlier on in the day, France began life under Philippe Saint Andre with a 30-12 victory over Italy in Paris.

The World Cup finalists made amends for the defeat to the same opponents in Rome last year with a four-try flurry and it’s they who top the table ahead of Sunday’s game between Ireland and Wales in Dublin.