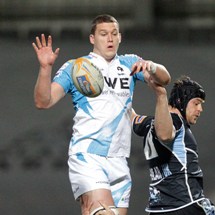 Ian Evans could force his way into Lions contention tomorrow according a former Welsh second row.

The Ospreys lock will start for Wales in their 6 Nations opener with Ireland at Dublin’s Aviva Stadium.

The 27-year-old will go head-to-head with Lions veterans Paul O’Connell and Donncha O’Callaghan, with ex-international Derwyn Jones believing a big performance could see him catapulted into the reckoning for the 2013 tour to Australia.

"This is a big opportunity for Ian," Jones told the South Wales Evening Post.

"He is up against a player in Paul O’Connell who has been one of the premier locks in world rugby for the past decade, a guy who is a leader on and off the field and who has captained both the Lions and his own country. In second-row terms he has been pretty much a phenomenon.

"If Ian can rise to the challenge it would increase his standing hugely.

"He is back to something like his best, but what he has in front of him tomorrow is an obstacle to his ambitions of becoming a Lion.

"If he can stand up well, it will be a huge step towards him advancing his career."

Evans won his first cap against Argentina five-and-a-half years ago but injuries have severely hampered a promising future.

The 6ft 8in star scored a memorable solo try on debut for his country but has made just 16 more appearances since then.

Knee, chest, ankle and collarbone problems have blighted his progress, with Sunday’s encounter in Ireland the first time he has featured in the 6 Nations since 2008.