One of the central figures in Australia's 2001 series success against the Lions has described the experience as pure 'magic'. [more] 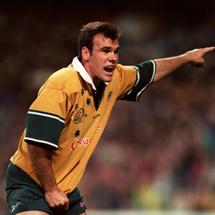 One of the central figures in Australia’s 2001 series success against the Lions has described the experience as pure ‘magic’.

Wallaby midfielder Nathan Grey started all three Tests against Britain and Ireland’s elite 11 years ago as the hosts confirmed their status as the premier nation in world rugby.

Grey was a solidifying figure in an Australian side that suffered a comprehensive defeat in the first rubber but bounced back to take the series 2-1 in one of the most memorable Lions’ adventures ever.

The former Waratahs star won a World Cup winners medal with the Wallabies in 1999 and experienced Tri Nations success against the All Blacks and Springboks but he admits beating the Lions was something very special.

“It was magic. Playing those Tests against the Lions was definitely one of the highlights of my career,” said Grey.

“It’s the ultimate challenge. When you get given that opportunity to face the Lions you’ve got to make sure you’re ready and totally switched on because you’re playing against a side that’s got a lot of history and is full of bloody good players – that’s a big, big challenge.

“One of my highlights from that tour was when I was playing for Australia A and we beat them up in Gosford. That was very much unexpected on all fronts.

“With the Wallabies, we were expecting ourselves to beat the Lions and that first Test in Brisbane was unbelievable. I remember running out and just seeing a sea of red. That was magic.

“I’d played all over the world but that Test was something else. I remember running out thinking, ‘Holy shit, this is awesome, but they’re in the wrong colours!’  That gave the Australian Rugby public an example of how you support your team.

“We got beaten in the first Test and then we had the second Test in Melbourne. The Australian Rugby Union obviously realised that they had to get some gold out there in the stands so that was brilliant for our game, too.”

That first Test at The Gabba always ranks highly in Lions’ memories but it was the nature of what followed that will live even longer in the hearts of Australian players and supporters alike.

Having been on the wrong end of a hammering in Brisbane, the world champs looked well on their way to losing the series a week later in Melbourne as they found themselves under the cosh and behind on the scoreboard at half-time in the Colonial Stadium.

But then the Wallabies did what they do best – they showed their mental resilience to somehow snatch victory from the jaws of defeat.

A Joe Roff try from a Jonny Wilkinson intercept moments after the interval turned things in their favour and the Wallabies never looked back.

And while the rest of the world had been writing them off following the comprehensive nature of their first-Test dismantling, Grey insists there was never a flicker of doubt that he and his team-mates wouldn’t get the job done.

“You realised that if you trusted your processes, trusted the guys around you and executed your game plan, you were going to win.

“Saying that and doing that are two different beasts but I think the Australia side we had back then was pretty strong in terms of determination and wanting to get the job done. And what better environment to test yourselves in than against the Lions – against the best.

“In the first half in Melbourne we were under the pump but we got our act together and got away with a win in that second Test. Then the win in Sydney was amazing. It was a special time in my life and my career.”

Grey’s stellar career saw him head to Japan to finish his playing days but he is now back in his homeland as skills coach with the Melbourne Rebels.

The 36-year-old is currently preparing for the start of the Rebels’ second Super 15 season as they look to build on a promising campaign, both on and off the field.

The Rebels may have finished bottom of the Australian conference first time around but a handful of impressive wins and the manner in which an Australian Rules Football stronghold like Melbourne has accepted the franchise, plus the marquee signings of Wallaby sensations James O’Connor and Kurtley Beale and the announcement that the Lions will play two games in Melbourne in 2013, ensures Grey is in a positive mood ahead of the new term.

Throw in the impact on Australian Rugby in general and the benefits of five Super 15 teams rather than four for the Wallabies ahead of the visit of Britain and Ireland’s top dogs and it’s no wonder that Grey has a permanent smile on his face during our interview.

“The addition of a new franchise obviously presented a few issues but everyone has to deal with that. It’s provided opportunities for a lot of young guys and has drawn a few guys back to Australia – that was the goal.

“It’s been brilliant to see how we’ve managed to get everyone together, draw on all sorts of different experiences and exposed guys to Super Rugby who might not have had that opportunity otherwise. It’s been a raging success from our perspective.

“We’re looking at signing guys in club footy in Brisbane, Sydney, Melbourne, Canberra and everywhere, really. The more guys we can provide an opportunity to, the stronger those club competitions will be. We’ve had a number of guys involved in our training sessions that have gone back to play club footy and they’ll lift that standard. The roll on effect of creating a new franchise is only going to strengthen Australian Rugby in the long run.

“It was a decent first season for the Rebels but there’s definitely lots of room for improvement. As a coaching staff, we’re under no illusions as to what is a massive challenge for us. We’ve put a lot of good things in place and a lot of young guys have stepped up and shown us that they can play at that level. Hopefully, that will encourage more guys to do the same. We’re constantly raising the bar so we’re looking forward to next season.

"James and Kurtley are big signings but they’ve got to add to us. It’s not a case of us saying that those two blokes coming to Melbourne is going to change everything. We’ve got to grow as a unit but they’re certainly two handy blokes to have on board.

“Then to be given a fixture against the Lions is awesome. The experience, the vibe and the love of rugby that the Lions bring to any country they go to is magical.

“It will be so good for the Rebels to play the Lions, it’ll be really special. They’re the elite side of rugby from the British and Irish perspective and it goes without saying that the playing the Lions is a once-in-a-lifetime opportunity.”