One of the surprise faces on the 2001 Lions tour says Scotland's defeat to England needs to be put into perspective. [more] 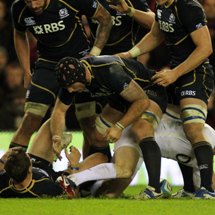 One of the surprise faces on the 2001 Lions tour says Scotland’s defeat to England needs to be put into perspective.

Andy Nicol was called up to the Lions squad for the third Test against the Wallabies having been leading a travel party in the country.

A scrum-half crisis ahead of the series decider in Sydney saw Nicol answer an SOS from Britain and Ireland’s elite but the former Scotland skipper is better known for stopping England from recording a Grand Slam triumph the year before.

A former Heineken Cup winner with Bath and now a BBC pundit, Nicol led the Scots to a famous 19-13 triumph over the Auld Enemy at Murrayfield 11 years ago.

The current Scotland side couldn’t match that result at the weekend, though, as they were beaten 13-6 by a new-look England in the opening round of the 6 Nations.

Scotland dominated possession and territory and created the greater scoring opportunities yet they came away with nothing after failing to score a try for the fourth game running.

Nicol admits that changes must be made ahead of Sunday’s clash with Wales in Cardiff but, rather than throw the baby out with the bath water, he is urging a measured approach despite the obvious disappointment of what he believes was a ‘massive missed opportunity.’

“I think we need to put it into perspective: for large parts of the game there was some very good rugby played by Scotland,” Nicol told The Scotsman.

“A lot of the players selected on Saturday are our first-choice, and we were very comfortable with the selection. It was just the execution of what happened on the night that let us down.

“I wouldn’t throw everyone out, but I would say there should be some changes. I’d like to see (Glasgow full back) Stuart Hogg come in.

“The selection of Dan Parks at 10, for a specific reason, to get Scotland playing in the right areas, didn’t work and I would say there was a bit of a spike in performance when Greig Laidlaw came on.

“There are a few changes to be made, but you have to put it into context.”