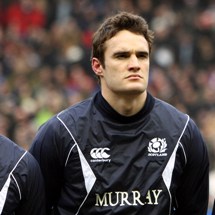 The ex-Glasgow wing was forced to retire from rugby following the 2010 6 Nations.

Evans suffered a horrific neck injury in a clash with Lee Byrne in the defeat to Wales in Cardiff and has since had to think about an alternative career.

Athletics was always mooted as a possible alternative route once Evans had made a better than expected recovery and the 26-year-old will now take his first steps in professional sprinting by competing in the 60 metres at the Scottish Athletics National Senior Indoor Championships at Kelvin Hall on February 19.

“I am looking forward to running in Glasgow. I am excited by the prospect of competing there,” Evans told the Scottish Athletics website.

“When I played there for Glasgow Rugby we used to do warm-ups in the Kelvin Hall in the winter so I am familiar with the arena and the track.

“At the moment I am simply gaining some race experience in the 60 metres. It is all new but I am enjoying that and the idea is to build some basic sprinting fitness.

“Further down the line I would think there’s more chance I will be looking at 200 metres or 400m. That’s more the goal to be honest. You have to start somewhere and get used to actual races as well as training.”

But while he is preparing to make his mark on the track, brother Max faces an emotional return to the venue of Thom’s 2010 nightmare.

Max and his Scotland team-mates travel to the Millennium Stadium to face Wales this Sunday in the first match between the two teams in Cardiff since the ill-fated 2010 fixture.