Toby Flood is among eight England players sent back to their clubs ahead of this weekend's fixtures. [more] 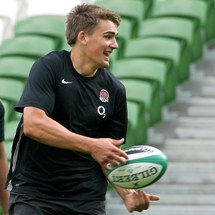 Toby Flood is among eight England players sent back to their clubs ahead of this weekend’s fixtures.

Flood missed the opening 6 Nations victory over Scotland having been suffering with a knee problem.

England’s first-choice fly-half for England’s 2011 6 Nations Championship-winning campaign, Flood spent a month on the sidelines before making his comeback appearance in Leicester’s win over Newcastle while England were in Edinburgh.

Charlie Hodgson started in Flood’s absence, scoring the game’s crucial try, and the 2005 Lion is set to keep the No10 shirt for this weekend’s trip to Italy.

“Players coming in have no divine right to expect the shirt, just as everyone has to work hard to keep it,” said England head coach Stuart Lancaster.

“Toby has come in bouncing like a spring chicken and looking to train well and impress. The reality is that he’s not played a huge amount of rugby and the likelihood is he needs more game time.”

None of the above were involved at Murrayfield but Lancaster could yet make changes to his matchday 22.

England’s interim boss has kept hold of 24 players for the Italian adventure, with Quins prop Joe Marler and Wasps scrum-half Joe Simpson the extra players who didn’t feature against the Scots.

Lancaster is unlikely to make wholesale changes to his starting XV for Saturday’s game, although Ben Morgan could be in line for a promotion following an impressive cameo from the bench last time out.

The Scarlets No8 replaced Phil Dowson in the closing stages against Scotland as both men made their international debuts and Lancaster has admitted the make up of the back row is an area for consideration for Round 2.

“I attach as much importance to how players conduct themselves in training as I do on what happens at the weekend. You want to create that mindset where players are thinking about being excellent every day. The back row was part of the selection debate before the Scotland game and it will be part of the selection dynamic for this weekend.”