Bradley Davies and Stephen Ferris have received mixed results after they were both cited for separate tip tackles. [more] 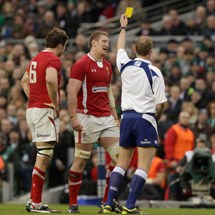 Bradley Davies and Stephen Ferris have received mixed results after they were both cited for separate tip tackles.

The pair were sinbinned for their second-half infringements during Sunday’s pulsating 6 Nations clash between Ireland.

Davies was yellow carded for an off-the-ball incident with Donnacha Ryan, while Ferris’s hit on Ian Evans gave fellow Lion Leigh Halfpenny the chance to slot the winning penalty at the Aviva Stadium.

With Halfpenny knocking over the 35-metre kick, Ferris received the ultimate punishment on the day but will not face any more time on the sidelines after his citing was dismissed.

Ferris is now free to play in Ireland’s fixture with France in Paris on Saturday but Davies will miss the remainder of the tournament after being handed a seven-week suspension.

That suspension was then reduced by five weeks due to Davies’ admission of guilt, conduct at the hearing and his previously good disciplinary record.

The ban means the Blues lock will miss Wales’ home ties with Scotland, Italy and France and the away game with England as Warren Gatland’s men look to build on their impressive 23-21 win in Dublin.

Davies is free to play again on March 26, 12 days before his club side face Leinster in the Heineken Cup quarter-final.

His absence from the Wales side leaves Gatland with a selection dilemma ahead of the Round 2 fixture with the Scots in Cardiff.

Gatland is already short of options in the second row department as first-choices locks Luke Charteris and Alun Wyn Jones are both out injured. Charteris, who was one of the standout performers in the recent World Cup campaign, is a long-term absentee, although 2009 Test Lion Jones is nearing a return to action.

The uncapped Lou Reed is currently with the Wales squad and is an option to start alongside Evans, but Gatland is expected to move Ryan Jones up from the blindside flank.

Former skipper Jones produced a superb display in the win over Ireland but the likely return of ankle-injury victim Dan Lydiate means Gatland at least has some room for manoeuvre.