Ireland's 6 Nations clash with France has been postponed due to an unplayable pitch. [more] 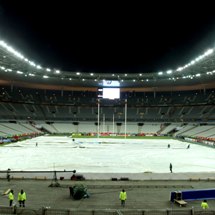 Ireland’s 6 Nations clash with France has been postponed due to an unplayable pitch.

The mouth-watering match up was called off just moments before kick off.

Freezing weather conditions in Paris had left parts of the pitch too hard to be considered safe enough for the players.

And with the temperature likely to plummet even further during the game itself, referee Dave Pearson took the decision not to start the round two fixture at the Stade de France.

Paris had been engulfed by freezing temperatures all during the week, with a low of close to -10 degrees Celsius expected after kick off which was scheduled for 9pm local time and 8pm GMT.

The match will now be played at a later date but tomorrow has already been ruled out as an alternative.

Ireland are now expected to return to Paris sometime in March, with the 6 Nations committee likely to announce the rearranged date over the next few days.