Wales completed stage two of the Triple Crown with a 27-13 win over a spirited Scotland on Sunday. [more] 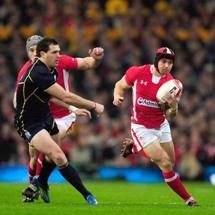 Wales completed stage two of the Triple Crown with a 27-13 win over a spirited Scotland on Sunday.

Warren Gatland’s men followed up their opening round win in Ireland with a comfortable success at the Millennium Stadium despite losing skipper Sam Warburton to a dead leg prior to kick off.

A brace of tries from 2009 Lion Leigh Halfpenny in a five-minute spell in the middle of the second half sealed a Welsh win that keeps them on track for a third Grand Slam in seven seasons.

Halfpenny followed up his last-minute heroics at the Aviva Stadium with a 22-point haul after being handed the kicking duties ahead of Rhys Priestland, while giant wing Alex Cuthbert claimed his first senior score on just his second appearance.

The two teams entered the break level at three points apiece but, although Wales dominated possession and territory early on, it was the Scots who should have led at half time.

Having gone through more than 20 phases approaching the 40-minute mark, Scotland looked set for a certain score until prop Allan Jacobosen knocked on at the base of a ruck with the line at his mercy.

Andy Robinson’s men were made to pay directly after the restart when Chris Cusiter’s failure to claim Priestland’s deep kick handed Wales an early attacking lineout. The end result was the game’s opening try for the particularly impressive Cuthbert as he powered through a weak tackle from Greig Laidlaw to hand Wales the lead for the first time.

Halfpenny slotted a well-struck conversion to add to his first-half penalty and Wales were 10-3 to the good with just two minutes gone in the second half.

And things got even better for Wales just moments later as Halfpenny added a second penalty after Scotland were reduced to 14 men. Nick De Luca needlessly hauled down Jonathan Davies after the Scarlets star hacked ahead and referee Romain Poite – on the advice of his touch judge – sent the Scotland centre to the bin.

The visitors did hit back with a Laidlaw three-pointer to close the gap to 13-6 on 48 minutes but Wales surged further ahead just two minutes later as Halfpenny raced over following fine work from Cuthbert. The newcomer stepped outside Lee Jones, drew Stuart Hogg into the tackle and then fed Halfpenny, who proceeded to dance in underneath the sticks having crossed the line out wide.

Halfpenny’s conversion handed Wales a 14-point lead at 20-6 before Scotland found themselves reduced to 13 when Rory Lamont joined De Luca on the sidelines. Lamont’s professional foul from an offside position put his team in all sorts of trouble and, even though, De Luca returned moments later, Wales were soon celebrating a third try.

Toby Faletau and Mike Phillips combined brilliantly at a five-metre scrum and the Wales No9 then held up the penultimate defender before popping off to the onrushing Halfpenny whose angle took him wide of the cover defence for another fine score.

The successful conversion stretched the gap to 27-6 two minutes before the hour mark and Wales were effectively home and dry.

Scotland refused to lay down and die, though, and they should have scored their first try in five games when Hogg was adjudged to have knocked on just a couple of metres short following a fine team move. They did cross the line with 16 minutes remaining as Laidlaw pounced from the back of a ruck less than a metre short but Wales never looked in danger of relinquishing their lead despite a frantic end to proceedings.

The one worry for Wales was an injury to George North that saw the teenage sensation hobble off before half time.