Lachie Turner's hopes of facing the Lions have been dealt a serious blow after he was ruled out of most of the new Super 15 season. [more] 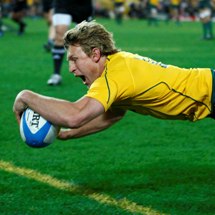 Lachie Turner’s hopes of facing the Lions have been dealt a serious blow after he was ruled out of most of the new Super 15 season.

Britain and Ireland’s elite head Down Under in less than 16 months’ time and Turner is among those battling for a Wallaby wing spot.

The 24-year-old starred for the Wallabies on their two-match tour of the UK late last year and was expected to challenge for a starting berth in the summer series against Wales.

But early reports suggest Turner will instead spend around six months on the sidelines after tearing his hamstring off the bone during the Waratahs’ pre-season win over a Samoan XV on Friday night.

"It's really hard to speculate at the moment on how long it will be, but it doesn't look good," said Turner, who has 15 international caps to his name..

"The Samoan player didn't like the idea of a winger being at the ruck so he cleaned me out, my leg got caught in the ruck and my body went over, lengthening the hamstring."

The extent of the injury means Turner is unlikely to return to action until August, effectively ruling him out of all but the Super 15 Final.

"MRI scans on Saturday revealed extensive tendon damage and, as a result, he will undergo surgery this Wednesday to repair or reattach the tendon, depending on the extent of the damage.

"It is anticipated that he will be out of action for at least six months. A further update will be made after surgery."

Turner may have missed out on initial selection for the recent World Cup, but his form in the games against the Barbarians and Wales in late November and early December suggested he would be in Robbie Deans’ thoughts for the newly expanded Four Nations Rugby Championship.

With first-choice wing James O’Connor having spoken of his desire to move closer to the action and impressed at fly-half in London and Cardiff, Turner stood a good chance of stepping up the pecking order with a strong Super 15 season.